The President is Here!

At least 17 of our nation’s presidents have been to Greensboro, from George Washington to Barack Obama. As you walk through this exhibition, imagine that you are witnessing one of these visits, and picture your surroundings. Are you with Washington on the battlefield, sitting in a restaurant with Clinton, among the crowds at the depot or having drinks at a cocktail party? 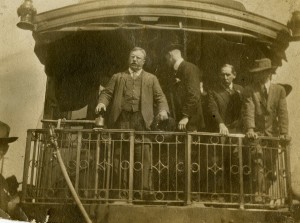 Future, sitting and former presidents have all visited our city. They have given speeches to win votes for themselves and others in their political party. They have helped us celebrate patriotic occasions and recognized local people and organizations. Presidential visits have also become part of our shared public memory, not from one perspective but from many, reflecting a wide range of political beliefs.

The who, what, when, where and why of campaign and presidential visits are an important part of the political discussion and countless words have been written and broadcast about presidential politics by media observers. During an election year, even more voices are heard as people of all ages and backgrounds take part in the political process.

If you had the chance to see a president visit, what would you do? Take a photograph? Talk about it with family and friends? Post about it in a tweet or on Facebook? Send an email? Write a letter? Add to a diary or scrapbook, or buy memorabilia?

The President is here now, so imagine what you would do on that day. Take a turn at the podium. Take a snapshot. Explore the presidential memborabilia and artifacts that are in this room. Go online. Add to the conversation so that we can hear the many voices of Greensboro.