Documentary Produced by the Museum Featured In Public TV Broadcasts 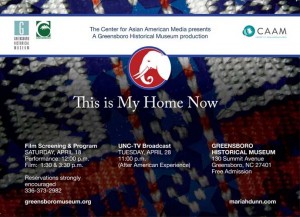 This is My Home Now, a documentary featuring teens from Montagnard families who fled their homeland in Southeast Asia, will be broadcast on UNC-TV on Tuesday, April 28 at 11 pm. Funded by the Center for Asian American Media and directed by Mariah Dunn Kramer, the Greensboro Historical Museum’s 30 minute film will follow The Last Days in Vietnam, a 40th anniversary look back on the end of the Vietnam War. This is My Home Now will also be broadcast on the American Public Television program “World” on Sunday, May 3 at 11 pm.

There are up to 20,000 Montagnards in America from many different tribes. Although the first Montagnard immigrants, a group of about 200, were granted refugee status in 1986 in recognition of their support of U.S. Special Forces during the Vietnam War, the majority are more recent arrivals fleeing religious and political persecution. Montagnards (French for “mountain people”), from the central highlands of Vietnam, have settled in states such as California, Florida, Massachusetts, Rhode Island and Washington, but there are more Montagnards in Greensboro than any place outside of Southeast Asia.

The four young people profiled in This is My Home Now have arrived in the past decade. They and their families are living in two worlds, supported by those who have come before them, but also by community members who have sponsored them or are looking after their educational and social needs. Experiences of hardship and of remarkable support throughout their journey make for a compelling story.

In addition to the broadcasts of the film, viewers will also be able to see an interview with the director and one of the students featured in the film on UNC-TVs “North Carolina Now” on Monday, April 27 at 7:30 pm. For more information about the film, please visit facebook.com/thisismyhomenow.