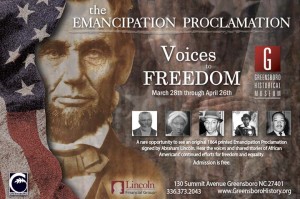 On Saturday, March 28 the Greensboro Historical Museum is opening its new exhibition, Emancipation Proclamation: Voices to Freedom. Visitors will follow a path through Greensboro’s history that includes powerful stories of 300 years of African American experience seeking liberty and freedom. The highlight of this four week exhibition is a Leland-Boker 1864 edition of the Emancipation Proclamation signed by President Abraham Lincoln, on loan from the Lincoln Foundation Collection of the Indiana State Museum.

This April marks the 150th (sesquicentennial) anniversary of the end of the Civil War. On January 1, 1863, in the midst of the Civil War, President Abraham Lincoln signed the Emancipation Proclamation which declared that within those territories in active rebellion, “all persons held as slaves shall be…forever free.”

The Lincoln Financial Foundation, the philanthropic arm of Lincoln Financial Group, has arranged for this rare document and other Lincoln artifacts, including an inkwell and Mathew Brady images from the Lincoln family album, to be loaned to the Greensboro Historical Museum.

The signing of the Emancipation Proclamation was a major step toward the abolition of slavery, helping to renew this nation’s founding philosophy of human liberty. Museum Director Carol Ghiorsi Hart says, “This exhibit invites visitors to ponder America’s founding principles, Lincoln’s hope for freedom for all and the experience of African Americans in our community.” A recently discovered New York State Museum audio recording of Dr. Martin Luther King’s speech commemorating the centennial of the Emancipation Proclamation will also be in the exhibition.

Admission to all programs is free, but reservations are highly recommended. Please call (336) 373-2982 or go to GreensboroHistory.org.