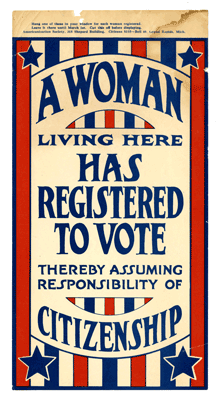 From Smithsonian Affiliations, a discussion of women’s struggle for the right to vote, from different perspectives.

After generations of struggle for suffrage, the 19th Amendment to the U.S. Constitution was passed in 1919 and ratified in August of 1920, giving women the right to vote for the first time – although not all women were included. At the centennial of the ratification of the 19th Amendment, this program will explore the suffrage movement through the activists that we may be aware of and stories of those less well-known.

Part of REPRESENT! From Women’s Suffrage to Changing the World, a virtual program series with Greensboro Public Library

Register to join on Zoom

Dr. Michelle Delaney, Assistant Director for History and Culture at the National Museum of the American Indian, will moderate the discussion and Q&A. In her role at NMAI, Delaney manages the museum’s research and scholarship team, and leads the intellectual program development for exhibitions, educational programming, publications, and digital scholarship. She also directs strategic internal pan-Smithsonian projects, and external collaborations and university partnerships. Delaney is chair of the editorial committee for the 2019 publication Smithsonian American Women, and is a current Board member for the Buffalo Bill Center of the West, a Smithsonian Affiliate.

Cécile R. Ganteaume is a Curator at the National Museum of the American Indian. She is the co-curator of the exhibition Americans, on view at the museum on the National Mall, and author of Officially Indian: Symbols That Define the United States. Ganteaume serves on the curatorial committee of the Smithsonian American Women’s History Initiative and is a recipient of a 2011 Secretary of the Smithsonian’s Excellence in Research Award and a team recipient of the 2018 Smithsonian Excellence in Exhibitions Award.

Lisa Kathleen Graddy is a curator of American political history, reform movements, and women’s political history which includes the Institution’s famous first ladies collection.  Her recent work includes the museum’s new exhibition, Creating Icons: How We Remember Woman Suffrage the voting rights section, “A Vote, A Voice,” as a co-curator of the exhibition, American Democracy: A Great Leap of Faith, and was an author and member of the editorial committees for Smithsonian American Women. Her research centers on the ways that Americans, particularly women, have found a public voice and wielded political power through organizing, participating in, and building institutions such as reform movements, voting rights movements, suffrage organizations, and political parties.

Dr. Crystal M. Moten is Curator of African American history in the Division of Work and History. A south side of Chicago native, she has taught at small liberal arts colleges on the east coast and in the upper Midwest. Her research and curatorial interests include the intersectional connections between African American labor, business, and civil rights history with emphasis on post-World War II Black freedom movements in the urban Midwest.

Register to join on Zoom