Asian and Pacific Americans make up more than 5% of the U.S. population—more than 17 million people—and those numbers are growing. Their ancestral roots represent more than 50% of the world, extending from East Asia to Southeast Asia, and from South Asia to the Pacific Islands and Polynesia. Among our Greensboro neighbors are more than 20,000 people with ties to this region.

I Want the Wide American Earth, the title of which comes from a stirring poem by Filipino immigrant, poet and labor activist Carlos Bulosan (1913-1956), was created by the Smithsonian Asian Pacific American Center and the Smithsonian Institution Traveling Exhibition Service (SITES). The exhibition is supported by a grant from the W.K. Kellogg Foundation. 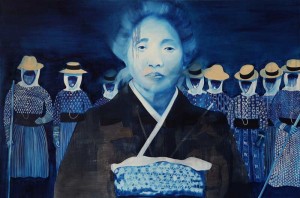 In this first exhibition of its kind, the Smithsonian celebrates Asian Pacific American history across a multitude of diverse cultures and explores how Asian Pacific Americans have shaped and been shaped by the course of the nation’s history. I Want the Wide American Earth tells the rich and complex stories of the very first Asian immigrants, including their participation in key moments in American history: Asian immigrants panned in the Gold Rush, hammered ties in the Transcontinental Railroad, fought on both sides in the Civil War and helped build the nation’s agricultural system.

Through the decades, Asian immigrants struggled against legal exclusion, civil rights violations and unlawful detention, such as the 120,000 Japanese who were interred during World War II. Since the 1960s, vibrant new communities, Pan Asian, Pacific Islander and cross-cultural in make-up, have blossomed.

This local display, supplementing the banners of I Want the Wide American Earth, brings forward the stories of our neighbors. Visitors will see family treasures, photographs and oral history interviews, made possible with the support of many individuals and organizations and a volunteer Community Advisory Board. An original film features selections from interviews with people with ties to Asian Pacific nations and cultures, including India, Korea, China, Thailand, Cambodia, Philippines, Pakistan, Taiwan, Laos, Singapore, Vietnam, Hmong, Montagnard, Malaysia and Japan.