The Greensboro History Museum Inc. houses more than 525,000 archival items in addition to more than 25,000 three dimensional objects. Many of these artifacts require specialized treatment by a professional conservator. Your tax-deductible donation in any amount would help the museum’s mission of preserving the history and heritage of Greensboro.

How to Adopt an Object

Donations can be made ONLINE or via check, credit card or pledge. Questions? Contact Museum Director Carol Ghiorsi Hart at 336.373.2306. 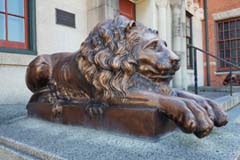 Since 1983 the lions have decorated the Summit Street doors to the museum, becoming the face of the institution. Manufactured by James, Beebe & Co., Bronx, New York, the lions are cast iron painted to look like bronze. They previously graced Bellemeade, the home of Harriet Eliza and Henry Humphreys Tate. When the house was demolished in 1954, many of its furnishings were donated to the museum, along with the lion sculptures. (1953.10)

This oil painting on canvas by an unknown artist was donated to the museum in 2018. Its subject, Jeduthan “Jed” Harper Lindsay (1806-1881), was a member of First Presbyterian Church. He and his brother Jesse gave land for the church building and cemetery. Both are buried in the cemetery, as are their parents. (2019.11.1) ADOPTED!

According to Armfield family tradition, this clothing was a militia uniform worn by their ancestor Mark Iddings (1784-1848), a Guilford County Quaker. An attractive homespun cotton tailcoat, a linen neck stock and drop-front cotton pants form the ensemble. (1939.510) ADOPTED! 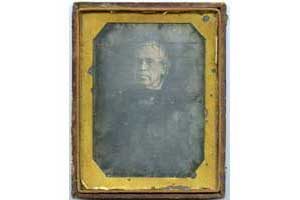 This daguerreotype of President Zachary Taylor is likely among the earliest photographs of him, probably taken soon after his return from the Mexican War. Although it shows Taylor in civilian dress, it became the basis for an engraving of him in military uniform. (1973.208.1)

To learn more about objects that have been already been adopted and conserved, visit our page about Conserved Objects.