The Greensboro History Museum has teamed up with the UNCG Department of Communication Studies to launch a series of Democracy Tables as part of the Project Democracy 20/20 initiative.

The Democracy Tables project seeks engagement from residents of Greensboro and the surrounding area to explore, question, and respond to community concerns in an intimate and informal group setting. We will talk, share experiences, and connect our fellow neighbors with answers, resources, and the government mechanisms that support change. This collaborative dialogue has aimed to deepen civic engagement and strengthen community leadership in our city.

Scroll down to learn more about our 2020-21 conversations around Voting; Police, Community & Justice; and Housing & Equity.

We are currently developing a Democracy Tables Manual to support continued conversations across the city. Check back soon for more information.

Democracy Tables are made possible by the NCA Center for Communication, Community Collaboration and Change. The Center seeks to facilitate partnerships with community-based organizations that create sustainable change for underrepresented and/or vulnerable communities through the production and application of communication-related scholarship and practice that lead to measurable outcomes for its community partners.

On April 10, 2021,  Dr. Stephen Sills of UNCG’s Center for Housing and Community Studies and Sonyé Randolph from City of Greensboro Neighborhood Development Department answered participant questions from our Democracy Tables conversations about housing and equity issues in Greensboro.

Watch a program on home ownership and generational wealth in Greensboro, organized with the Greensboro Public Library in February 2021.

Racial and economic disparities have fueled the debate around inequitable housing. Still, policies from the New Deal and programs instituted by the Federal Housing Administration (FHA) are prime examples of the federal government’s responsibilities surrounding housing. Following the housing shortage from the Great Depression, the federal government started a program to increase the housing supply and segregate access to housing. New suburban subdivisions were subsidized by the government, with the condition the homes be only sold to white individuals. The FHA argued the houses would lose their value if the subdivisions were integrated, but evidence shows property values would go up when African American families tried to buy homes in white neighborhoods. This policy became known as “redlining”, and maps of every metropolitan show the policy. Primarily African American neighborhoods would be appraised too risky for mortgages and insurance.

What are your thoughts? Have you seen the effects of redlining in the community today? Does racial inequality affect other facets of housing? Find out more on the government’s role in housing disparities and redlining in this article and a radio interview on NPR with Terry Gross from 2017: A ‘Forgotten History’ of How the U.S. Government Segregated America. Also, check out a documentary about the federal government and the state government’s role in redlining and segregation: Segregated by Design.

To see a map of redlining in Greensboro in 1937, check out this interactive model from the University of Richmond. (Note that the descriptions of the map areas contain racial terminology from the time period.) 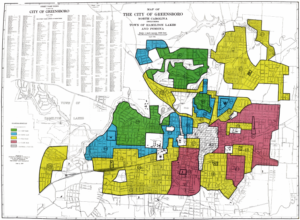 Redlining has had a widespread and long-term impact on communities across the country. In three major cities in North Carolina – Durham, Greensboro, and Charlotte – redlining has led to warmer summer temperatures in regions of the cities. These areas often have more paved surfaces and fewer trees and parks.  In a study published in the scientific journal Climate, 108 urban cities were studied, and 94% of historically redlined neighborhoods experienced a 5 degree warmer increase, but in some cases, it was as high as 12 degrees. Increased temperatures can lead to long-term health problems, including asthma, blood pressure, and heart disease.

What other disparities does climate change identify? How can the community work together to improve the effects of climate? Check out the North Carolina Housing Finance Agency article on the impact of climate from 2020 for more information: Historically Redlined Neighborhoods Experience Worse Heat.

Greensboro: One of the Worst Cities for Eviction

The COVID-19 pandemic has worsened financial crises for many Americans. Housing costs are not decreasing, and the threat of eviction is near for many renters. North Carolina and Greensboro specifically are both higher risk places to live because of the high eviction rates. At the end of 2020, 9.6% of renters in North Carolina were at risk of eviction, ranking the state as 17th for the highest risk for eviction. According to the Eviction Lab at Princeton University, in 2016, Greensboro was the seventh among the U.S. for highest eviction rates.

Has eviction impacted you? How should the process change? What do you think makes this a systemic issue in Greensboro? Learn more about the Eviction and Lab and Greensboro’s high eviction rates on the Eviction Lab website and a story from WFMY News 2: Greensboro Ranks 7th Among U.S. Cities With High Eviction Rates.

The City of Greensboro has left the Guilford County Continuum of Care Coalition and created the Greensboro Continuum of Care. The city council voted to form this new government agency because the city was already responsible for organizing many of the programs available for people experiencing homelessness in Greensboro. Though up to date numbers of individuals experiencing homelessness are not always accurate, it is believed that there are around 600 people without shelter in the city. The new agency, the Greensboro Continuum of Care, works closely with the federal department of Housing and Urban Development and connects federal resources with over 50 private organizations and charities addressing homelessness. Because of the pandemic, the city has focused on finding permanent housing, spending over $1.5 million of its $2 million budget for homelessness on permanent housing.

Fair and Adequate Housing in Greensboro: What are the Barriers?

At the end of 2019, the City of Greensboro published a report titled Analysis of Impediments to Fair Housing Choice. This document laid out the current impediments to fair housing, including: zoning standards, segregation, immigrants and refugee needs, disability, and access to adequate housing. The report outlines four primary goals in regards to fair housing: 1) reducing segregation and build on the growing racial, economic, and geographic diversity, 2) eliminate racially and ethnically concentrated areas of poverty, 3) reduce disparities in access to community assets such as schools and public transportation, and 4) narrow the gap that leads to disproportionate housing needs.

To find out more about the city’s report and the data used to create a 10-year plan to improve fair housing, check out the information published in 2019 (PDF Download): 2019-2024 Analysis of Impediments to Fair Housing Choice. Also, to see what other local resources are available surrounding Greensboro’s housing, click the links below.

Center for Housing and Community Studies at UNCG

Despite congressional limitations on local police reform, the federal government has many tools to collect data on police force, investigate misconduct, and use the influence of the Department of Justice (DOJ). The DOJ can create their own models for just policing and reform for federal organizations. Congress has many options including  placing conditions on federal funding to encourage state policy changes and require the DOJ to create best practices for police procedures.

What are your thoughts? Since the DOJ can create their own models for just policing and reform for federal organizations, do you think they have done a great job with this or do you believe there is a need for more reform? Find  out more on the federal government’s ability to reform law enforcement organizations in this Congressional Research Service report from June 2020 (PDF download): What Role Might the Federal Government Play in Law Enforcement Reform?

Reassessing Use of Force in North Carolina
State leadership has set up a task force to reassess the use of force policy with “community policing advocates, state and local law enforcement agencies, justice-involved individuals, representatives of the judicial branch, individuals from marginalized populations and more” (paragraph 2). In Governor Cooper’s executive order, he called for the task force to develop solutions to help eliminate deadly and unjust outcomes in the criminal justice system that significantly impact communities of color.

What type of solutions do you think the task force should implement? Learn more about  Governor Cooper and the state legislature’s plans for police reform in this June 2020 news broadcast from WXII TV: North Carolina police to reassess arrest, use-of-force policy

Mental Health Responders in Greensboro
Following the death of Marcus Smith after being taken into custody by the police, the Greensboro Police Department (GPD) changed its policies for restraint. The GPD also started a pilot program where mental health counselors assisted police in calls. After the program, 60% of involved officers saw the benefit of mental health professionals for crisis calls.

Have you seen a positive or negative impact in our community because of this pilot program? How do you feel the GPD can better serve the community? Read more in this Greensboro News & Record editorial from November 2020: Our Opinion: A police reform that is working

On October 4, community experts Leila Lewis of You Can Vote, Danielle Pritchett from the Greensboro Public Library, and League of Women Voters of the Piedmont Triad co-president Ann Proescholdt-Shaw answered questions about voting in Greensboro in 2020. Featuring special musical guests Marianna Levithan and Gabe Parks.

You Can Vote!: Ways to Vote, Absentee Ballots and More!

Are you overwhelmed with conflicting information out there about voting? Listen in as Danielle talks with Leila Lewis of You Can Vote about everything you need to vote. You Can Vote is a nonpartisan organization that specializes in voter education for Guilford County and surrounding area communities.

Danielle is here to show us step by step how to register to vote online in North Carolina.You can get started today: https://www.ncdot.gov/dmv/offices-services/online/Pages/default.aspx

Guilford County Board of Elections
This site includes links to check on your voter registration status, polling place, district, and candidates you’re eligible to vote for. It also has a link through which you can print out a voter registration form. The site also features information on applying for an absentee ballot, as well as election statistics.

North Carolina State Board of Elections
This site provides a link through which you may print out a voter registration form. It also provides links to state laws pertaining to elections, the agency’s publications, applying for absentee ballots, local boards of elections in the state, and other useful items. On this site there’s also a link through which you may check the status of your voter registration. The site provides election statistics statewide and at the local level, and some pages on the site may also be viewed in Spanish.